Nowadays we all know that Whenever there is a talk about crypto there is also talk about Elon Musk. Elon Musk’s recent tweet about dogecoin again changes the price. 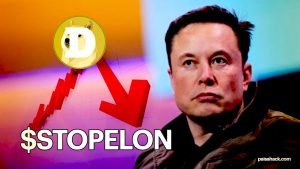 Crypto is the most trending topic nowadays because the price is getting down again and again. Now some are saying this is the best time to buy and invest in crypto and some are saying crypto is now over. But what Elon musk is saying?

We all know about Elon Musk who is the founder and CEO of Tesla and SpaceX. Crypto investing is the Side job hustling for Elon Musk. Elon musk has constant support for Bitcoin and meme-based cryptocurrency, Dogecoin.

On 20 May, Elon Musk tweets “Yeah, I haven’t & won’t sell any Doge,” and he is the ultimate holder of dogecoin. His tweets on dogecoin have turned the once-obscure digital currency into a speculator’s dream.

Musk has posted numerous comments about cryptocurrencies on Twitter this year, causing prices to gyrate.

After this tweet of Elon Musk, Dogecoin was up 12% at $0.405, according to crypto exchange Binance.

Last week, Elon Musk said and tweet on tweeter that Tesla would no longer accept bitcoin for car purchases citing long-brewing environmental concerns for a swift reversal in the company’s position on the cryptocurrency.

After this tweet about bitcoin, the response to Elon musk’s tweets has become increasingly negative and people blaming him for the rise or dip in the prices. Most People are saying that Elon musk is manipulating the market.

It further explains why Elon Musk’s behavior is a fault: “Elon Musk is infamous for irresponsibly manipulating the cryptocurrency market with his Twitter account. Just recently, he did it again, causing a massive crash across all frontiers when he tweeted that Tesla will cease to accept Bitcoin as payment. Anyone with even a shred of critical thinking sees through his lies. He has been trying to pump crypto for ages, tweeting about it to no end, and even going to Saturday Night Live as a final resort to get Dogecoin up! It’s ridiculous!

The current price of Bitcoin is $38k after a week of Elon musk tweets.