You might often wonder why companies like Apple, Samsung, Htc etc price their flagship smartphone so high, but you will be shocked to know that the price of these smartphones are nothing as compared to the 10 most expensive phones in the world.

Today in this post I will be sharing the most expensive phones that you can ever buy (if you can!!). You will be surprised and shocked to know these insanely priced smartphone. These expensive phones are priced many times higher than you think and than current flagship smartphones.

Thought phones nowadays is a necessity and major part of our lives and we can pay good enough amount. But it is worth to invest a heck lot of money just to a phone ? Why are these phones so insanely priced ? Keep reading to the reason behind it and also know which is the most expensive phone in the world.

Meet the most expensive phone in the world or rather most expensive iPhone is the world. This is the costliest phone you would ever come across. Here’s what so special about this phone:

The body of this iPhone 5 is made of solid gold, while the edges of the iPhone have 600 white diamonds. The Apple logo found on the back of the phone itself includes 53 more diamonds making this phone costlier. 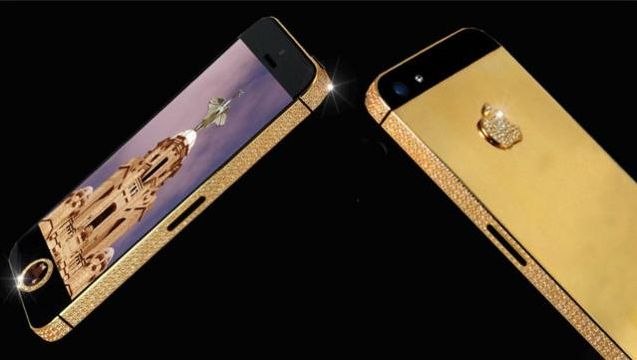 Now let’s have a look at the specs of this iPhone 5 Black Diamond. The phone boosts a 4 inch Retina display having a resolution of 1136 x 640 pixels which translates to a pixel density of 326 PPI.

The phone has got an 8 megapixel rear camera with 1080p HD recording capability, 720p front-facing camera. It is available in 16GB, 32GB and 64GB versions. On connectivity it includes GPRS, EDGE, EV-DO, HSPA, HSPA+, DC-HSDPA, LTE, Wi-Fi, GPS and Bluetooth.

Standing at the top of most expensive phone this iPhone 5 Black Diamond is priced at $15.3 Million.

Here is the second most expensive phones in the world with a total construction cost of £5 million. The bezel of this phone is handmade from rose with approx 500 individual flawless diamonds which total over 100ct.

At the rear section, the back is formed is formed using rose gold along with the added touch of its rose gold Apple logo and 53 diamonds.

Its navigation is made from platinum which holds a single cut 7.4ct pink diamond and it also includes a rare 8ct single cut Flawless diamond which can replace the pink one. 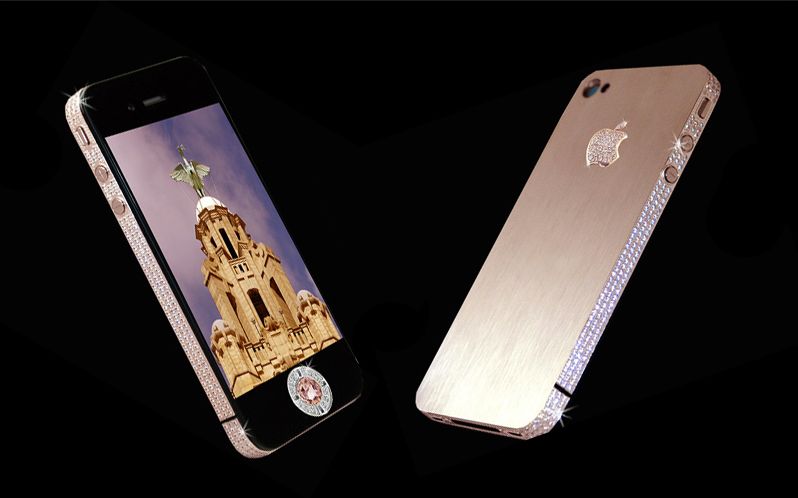 The handset is 32gb and limited edition of only 2 to be ever made and costs around $8 Million.

The third spot of the most expensive mobile phone is also occupied by an iPhone . Coming at no. 2 on our list is Supreme Goldstriker iPhone 3g 32gb. 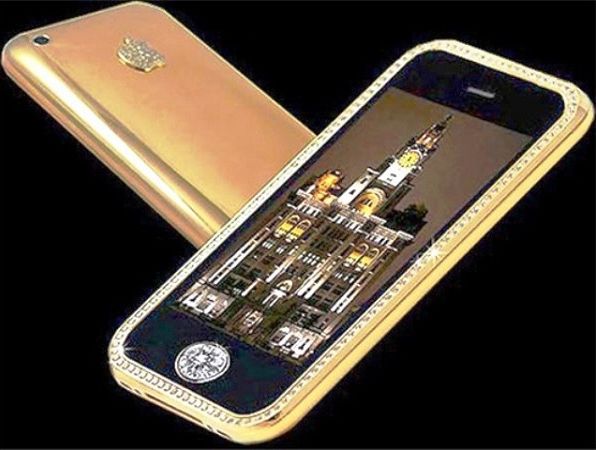 This luxury phone comes with the price tag of $3.2 Million. Just as the other luxury iPhone s this is again created and designed by Stuart Hughes.

This high-end jewelry phone is encrusted with 136 F perfect diamonds, 271 grams of 22 carat solid. A 7.1 carat diamond is set on its home button to finish the expensive look.  This expensive phone flaunts a rare Kashmir gold and its inner lining is designed with nubuck top-grain animal skin.

At the fourth we have yet another iPhone . This is the most lavish cellular telephone on the planet and is still possessed by a variation of the iPhone , dubbed as the King’s Button in iPhone 3G. 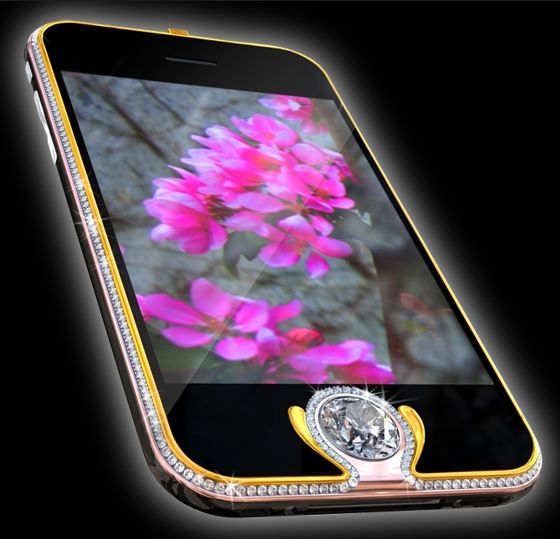 This luxury phone is created by prestigious diamond setter from Austria, Peter Aloisson. This phone is made of 138 precious stones that makes it cost go up at around $2.4 million. The home button is flaunted with wonderful white Diamond of 6.6 carats which improves the Quality magnificence of this expensive phone.

The Goldvish Le million is one of most expensive phones in the world. This phone is specially designed by famous designer Emmanuel Gueit, who is also know for designing a lots of luxury watches and Jewellery. 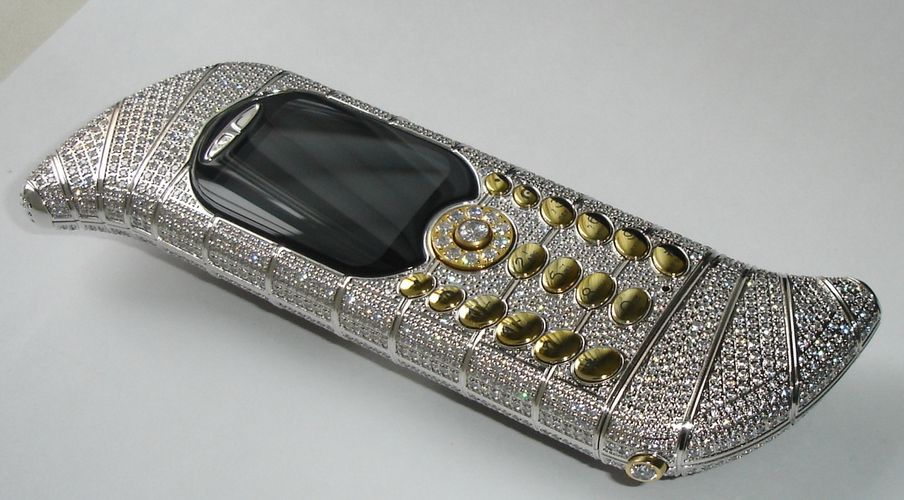 When it was launched, the Goldvish was also awarded by Guinness World Records as the world’s most expensive mobile phones sold in the Millionaire Fair in Cannes, France in September 2006. What makes this luxury phone’s to cost at 1.3 million is that, this stylish phone is made with 18k white gold and 20 carats of VVS1 diamonds.

Standing on the sixth position is the Diamond Crypto Smartphone. The phone runs on Windows CE Operating System, and was designed by luxury accessories maker Peter Aloisson. 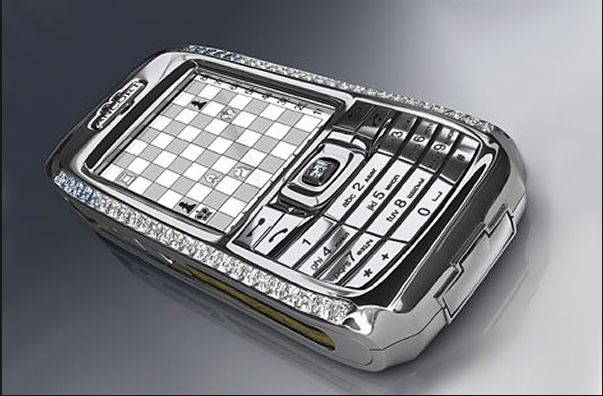 This luxury smartphone is priced at a $1.3 million and is tagged as the one of the priciest in the world. It features a cover decorated with 50 precious diamonds, out of which 10 are the erratic blue ones.

Beside the precious diamond, this phone also features few sections made in rose gold as well. It also gives security against kidnapping and technological bribery.

The Gresso Luxor Vegas Jackpot priced at $1 million stands at number seven. This is a unique phone not because of the Jewels its made of but because the two hundred year old African Blackwood used at the back. 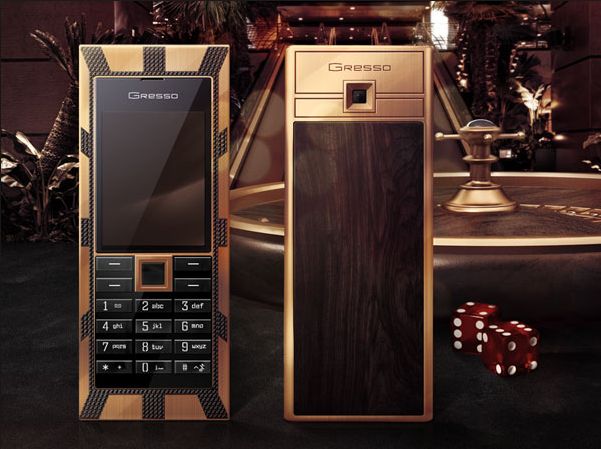 That wood is the most lavish wood in the world. Its keys are made of cobalt crystal. And it costs a cool $1 million.

In the list of world’s most expensive mobile phones Vertu Signature Cobra ranks on number eight. The device has a cobra draped at its sides made out of four hundred and nine rubies and two emeralds as eyes. 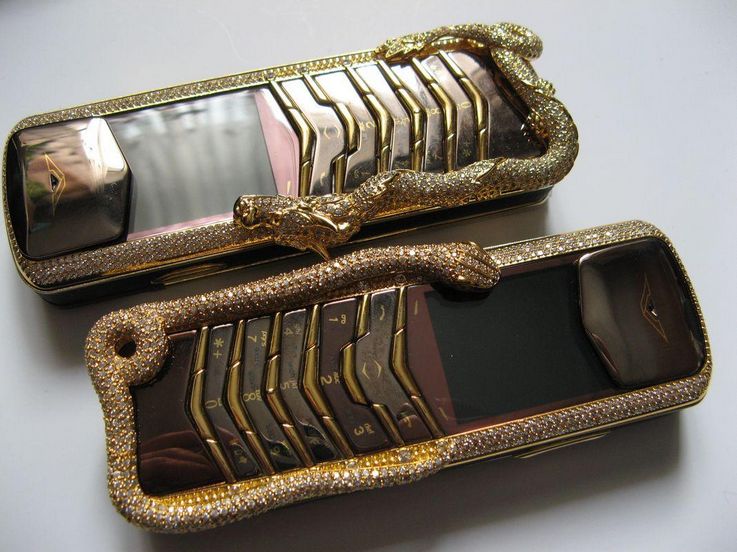 This phone is designed by French jeweller, Boucheron. The rare pear cut diamond is installed into the frame. This classy luxury phone is priced at $310,000.

Next in the list is the the Sony Ericsson Black Diamond. Jaren Goh gave and designed this classy idea for Sony. the phone highlights mirror enumerating, polycarbonate mirror and a natural LED innovation. 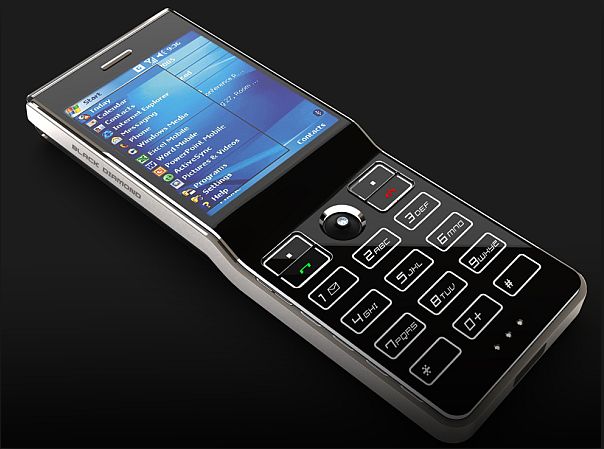 The Black Diamond is a super thin phone with a shape distinctive from other phones. Its border-less look is enhanced further by the black glossy finish. 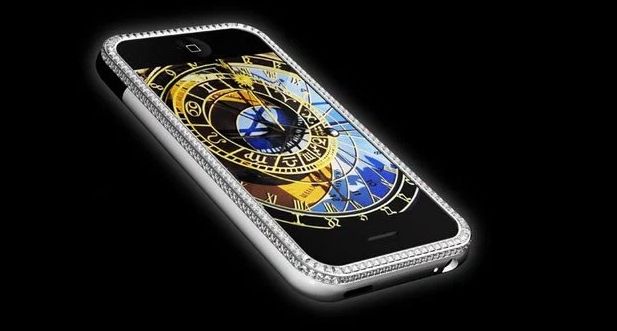 As already mentioned the iPhone Princess Plus is priced at $176,400.