Nearly everyone has heard of vaults, but few know just how important they are.

Vaults play a critical role in protecting some of the most valuable assets in the world, from money and jewels to important documents and art.

So What Is The Most Secure Vault In The World? And what makes it so safe? Read on to find out.

The first layer of protection is the door. Bank vault doors are usually made of steel and can weigh up to 20 tons. They are also reinforced with a thick layer of concrete.

This makes them extremely strong and difficult to break through. The door is also fitted with a number of locks, including a time lock that prevents the door from being opened during certain hours.

The second layer of protection is the inner vault. This is a smaller room within the bank that is used to store valuables.

The inner vault has its own door, which is also made of steel and reinforced with concrete. This door is often fitted with a time lock as well.

Inside the inner vault, there are usually a number of shelves and safes. The safes are used to store valuables such as jewelry and important documents.

The shelves are used to store less valuable items, such as cash.

The third layer of protection is the security system. Most bank vaults have an alarm system that is triggered if the door is forced open or the inner vault is breached.

The alarm system is connected to the police so that they can be alerted if there is a break-in.

Bank vaults are designed to provide a high level of security. With multiple layers of protection, they are able to keep your money and valuables safe from thieves and burglars.

The Most Common Features of Any Vault

– A vault is typically a room or container that is used to store valuables.

– Vaults are often made out of concrete and steel in order to protect the contents from thieves.

-Vaults typically have thick walls and a heavy door in order to make it difficult for burglars to break-in.

– Most vaults also have a complex locking system that further protects the contents from theft.

Vaults are an important security measure for protecting valuables from theft.

However, it is important to remember that no vault is completely impenetrable and that the contents should be insured in case of a break-in.

The Vault of the Bank of Spain

The Bank of Spain’s Vault is an impressive feat of architecture, built-in in 1892 and still in use today.

The Vault is made of solid granite and houses many of the bank’s valuable items, including coins, jewelry, and documents.

The Vault was designed by architect Luis Salcedo, who also designed the Granada Cathedral. The Vault is located in the basement of the Bank of Spain’s main building in Madrid.

It is made up of 12 separate rooms, each with its own set of massive granite doors.

The Vault is incredibly strong and secure and has survived a number of earthquakes over the years. In fact, it is said to be one of the safest places in Madrid!

If you are interested in learning more about the Bank of Spain’s Vault, be sure to pay a visit the next time you’re in Madrid. 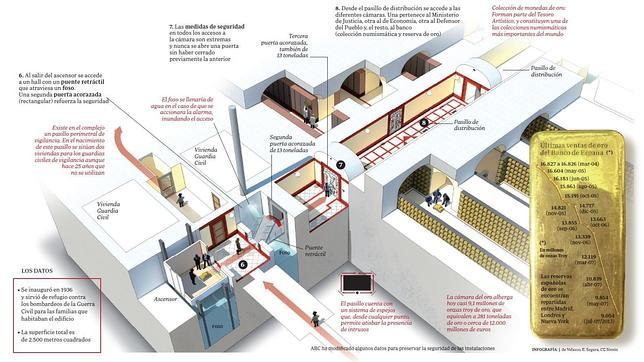 The New York Federal Reserve Vault is one of the most important parts of the American financial system. It’s a massive, subterranean chamber that stores billions of dollars worth of gold and other valuable items.

The vault is one of the most secure places on earth and has been used to protect America’s wealth during times of war and economic turmoil.

The vault was first constructed in the early 1900s, in the midst of a period of great economic expansion in the United States.

At that time, the country’s gold reserves were stored in several different locations, including the New York City Sub-Treasury building and the U.S. Mint in Philadelphia.

But as the value of gold rose and America’s economy grew, it became clear that a more secure facility was needed to store the country’s wealth.

In 1914, construction began on the New York Federal Reserve Vault. The vault is located 80 feet below street level and is made up of a series of massive chambers that are connected by a maze of corridors.

The vault is protected by several layers of security, including armed guards, motion sensors, and reinforced walls.

The New York Federal Reserve Vault has played a vital role in the American economy for more than a century.

It’s been used to store the country’s gold reserves during times of war and economic crisis and is currently home to nearly $200 billion worth of gold.

The vault is a symbol of America’s wealth and power, and its role in the economy is essential.

Svalbard Global Seed Vault is a secure seed bank on the Norwegian island of Spitsbergen near Longyearbyen in the Arctic Svalbard archipelago, about 1,300 kilometers(810 mi) from the North Pole.

The site was chosen because of its geology—the permafrost and the rock overburden provide a naturally frozen environment—and its location near the Arctic Ocean, which provides cool temperatures.

ver the world as a safety net against catastrophic events that could destroy global food supplies. The purpose of the Vault is to store duplicates of seed samples from the world’s crop collections

The facility opened on 26 February 2008 and is managed by the Norwegian Ministry of Agriculture and Food. The Svalbard Global Seed Vault is currently the world’s largest facility for storing seeds, with a capacity of 4.5 million seed samples.

The vault holds seeds from more than 5,000 species of plants, including cereals, legumes, vegetables, fruits, and forage crops.

The facility is designed to withstand natural disasters, including the eruption of a nearby volcano, as well as human-caused disasters, such as war or terrorism.

The vault is located inside a mountain on Spitsbergen and is operated by the Norwegian government. In 2015, the vault was damaged by melting permafrost, but it has since been repaired and is still in operation.

The Svalbard Global Seed Vault plays an important role in preserving the world’s food supply and is an essential tool for ensuring food security in the event of a global catastrophe.

What About Virtual Vaults for Virtual Assets?

Most virtual vault services are very secure. They use strong encryption to protect your data, and they often require two-factor authentication to access your account.

That means that even if someone hacks your password, they won’t be able to get into your account unless they also have your phone or another device that can receive the second factor of authentication.

However, no system is perfect, and there is always a risk that something could go wrong. That’s why it’s important to choose a virtual vault service that offers backups and other security features.

That way, if your computer crashes or you can’t access your account for some reason, you’ll still be able to get your important files. Additionally, it’s a good idea to keep a backup of your own just in case. You can store it on an external hard drive or in the cloud.

(Just make sure that it’s encrypted and that you have two-factor authentication set up for it, too!)

Virtual vaults can be a great way to keep your important digital assets safe and secure. Just make sure you choose a reputable service and take precautions to protect your backup.

Conclusion – What Is The Most Secure Vault in the World? 2023

There is no one perfect answer to the question of what is the most secure vault in the world.

The best solution for your needs will depend on a variety of factors, including a budget, security requirements, and how much access you need to have to your stored items.

Hopefully, this article has given you a better understanding of your options and helped you make an informed decision about which type of vault is right for you.