There was a time when I always had to have the newest version of the program I was running. I used to like testing out fresh releases in development to see what exciting new features had been included.

While I no longer place a premium on the most cutting-edge releases, I am aware that many of you do.

The current development version of Kodi is the most often requested topic I cover.

You see, the Kodi team always works to improve their software, and every night they release a new version of the software with any new features or bug patches that have been included.

Consequently, if you are interested in trying out the most recent version of Kodi, read on to learn how to get the Kodi nightly builds. But before we go into whether you should or not, let’s discuss the pros and cons.

If you’re just getting started with Kodi, you may be confused about what a “nightly build” is.

In order to grasp this concept, certain definitions are in need.

Even so, engineers will roll out nightly versions so that a select group of people may try them out and offer feedback.

Although there are fewer bugs in Beta Builds than in Nightly Builds, they still need to be fixed before being declared stable.

Developers may skip this stage and go directly to a Release Build, although it’s common practice to do one more task before releasing. It is possible to release one or more Release Candidates to the public for final testing.

Release Candidates are almost identical to the final product. The goal is to increase the sample size of people using the software to find bugs.

Then, at last, we have a Release Build. This is the end result, and it’s what most of us will eventually get from a retailer or Kodi’s own site.

Most users should stay with the stable release versions.

A fresh installation of Kodi is recommended if you wish to experiment with one of the nightly releases by tweaking settings and trying out new features.

That way, if there is a problem with the installation, it won’t affect the main system.

How to Install Kodi Nightly Builds?

If you have an Android TV, I have a comprehensive guide on how to set up Kodi on it. Downloading from the Google Play Store is the simplest option there.

You may also sideload Kodi via Kodi. tv, which is covered in that post. Since the Kodi nightly builds are not hosted anywhere else, we’ll be downloading and installing it from their official site. 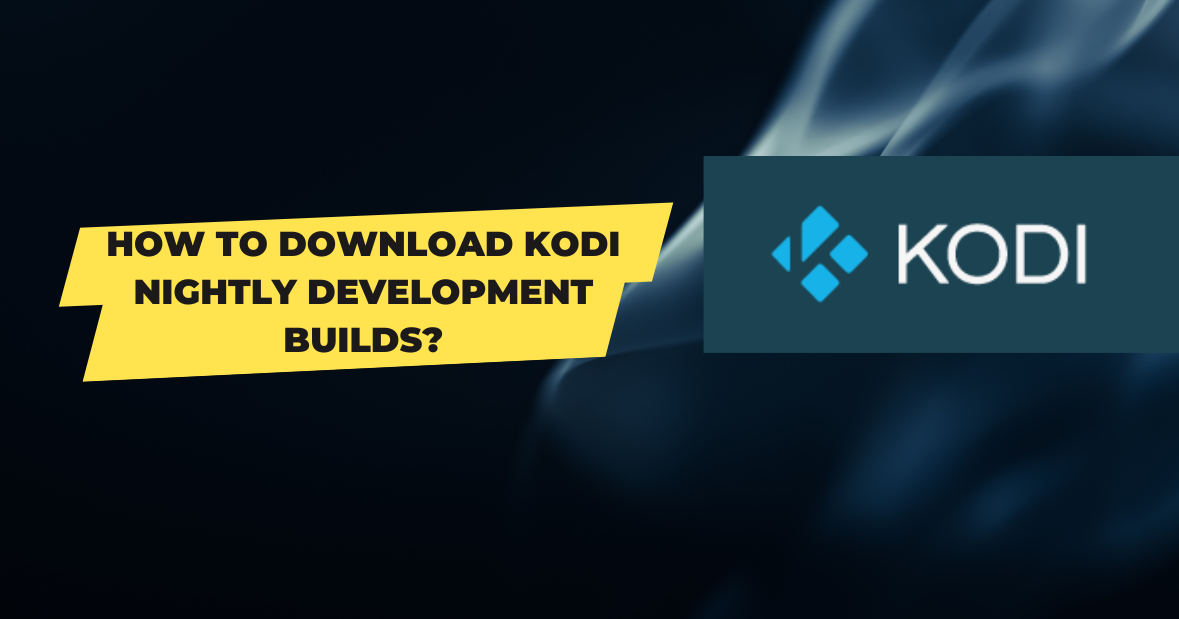 For the sake of simplicity, I will be utilizing screenshots taken on my windows computer throughout this article. It doesn’t matter what OS you’re working in, however; the method is the same.

I’ll say it again: if you have any questions, the article I linked to up there will explain everything in great detail.

We’ll begin by visiting Kodi. tv, the software’s main online hub. The site is accessible from any web browser. Keep in mind, however, that the ability to download files has been disabled in certain browsers (Puffin TV, for instance).

AFTVNews’s Downloader app is great if you don’t already use a browser to sideload applications on your Android TV. It’s preconfigured to access the internet and sideload programs quickly and easily.

Visit Kodi. tv, then choose “Download” from the menu. You can often find this at the top right corner of a page. In other cases, though, you may need to access the menu in order to see it.

On the downloads page, choose the OS version you’re using. If you’re using an Android TV to install it, you may discover both versions by clicking the Android button.

When you go to the next page after choosing your OS, you’ll automatically see the most recent Release Build. The Nightly Kodi Builds may be accessed through the Development Builds menu.

Nightly builds for every OS come in a variety of flavors. You should get the 32-Bit ARM version if you’re intending to use it on an Android TV. ARM CPU architecture is often used in Android TVs.

Popular chipsets like the Amlogic S905 and S922 and the NVIDIA Tegra series of CPUs fall under this category. When you confirm your version selection, the installation will proceed normally.

Kodi might be installed from inside your web browser, depending on your system configuration. In such a case, you may need to use your preferred Android file explorer to do the installation.

Just keep in mind that not everyone uses the latest nightly Kodi releases.

When you’re all ready to relax with a good television or movie, then Kodi lets you down, it’s hard to take. In light of this, you should never use a nightly build as your primary Kodi installation.

Store it on a second system so you may experiment freely. By doing so, you may try out the newest features without endangering your production environment.