In this post, we have shared a view on how to undo ignore messages on messenger.

If someone is bothering you or you’ve been getting too many messages from someone and need a break, you can ignore their messages in the Messenger app.

In the same way, you can undo ignoring messages on Messenger if you change your mind and want to hear about the messages and talk to the person again.

It’s possible that you won’t have the mental capacity or physical stamina to respond to someone.

Until you’re ready to talk to them on your own, you can avoid being troubled by their texts by ignoring their messages. You won’t be aware of any disturbances, thus there will be a lot fewer.

How to Ignore Messages on Messenger?

2. You can ignore someone’s message by pressing and holding their chat box for a few seconds.

3. To ignore it, choose the “ignore the message” option.

4. Open the chat box, click the icon in the upper left corner, scroll down until you see “Ignore the message,” and click it.

Using this method, you can ignore both one-on-one messages and group messages. If you don’t want to read these messages, the app will save them in the spam folder.

How to Undo Ignore Messages on Messenger? FIXED

When you ignore someone’s messages, you no longer get alerts when they call or send you a message. Their chat box is saved in the spam folder. 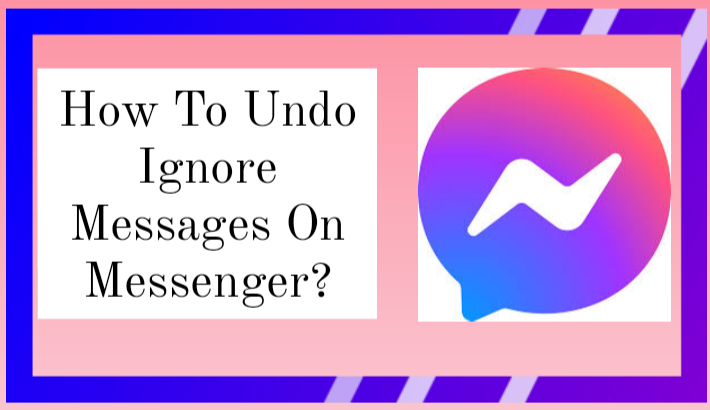 You can get it out of there and un-ignore the message. You can stop ignoring messages in Messenger in the ways below:

1. By sending a Message on Messenger

Message the person you ignored to undo ignore messages on Messenger. Here’s how:

You can now see all of the conversations with that person in your main chat list, even if you have previously ignored them.

Despite the fact that this feature is not available in the Messenger app, the conversation window will still be refreshed as a result of the procedure.

Once you’ve set the discussion to ‘Ignore’, you can read the new texts without the other person noticing that you’ve already read them.

It removes the burden from your shoulders, so you may respond when you’re ready. Once you’ve unignored the messages, the individuals on the other side will be able to see that you’ve read them.

Conclusion: How to Undo Ignore Messages on Messenger?

In this way, you’ll get to know how to undo ignore messages on Messenger. If you already have a messenger app installed on your phone, it is much easier to unignore the messages using the first step.