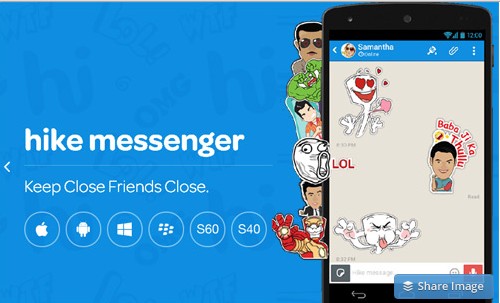 Written by Aishwar Babber
WhatsApp, which is a very popular free messaging app and is used by over 500 million people world wide. Though WhatsApp is a free and widely used messaging apps, it lacks a lot of features which are offered by other apps.
Some of the things where whatsapp disappoints us is, the file size limit, low number of max members in a group, lack of stickers and many more features. And also if you are bored using WhatsApp, you can try these best Alternatives To WhatsApp.

Hike messenger is one of the best alternative to WhatsApp. In fact, with my personal experience I would say it’s better that WhatsApp ( pardon me WhatsApp, but it is a fact ). Like WhatsApp, Hike Messenger is also available for free in Play Store, Apple Store and Windows Store.

Hike Messenger offers some of the unique and awesome features which we don’t get in any other messenger. It has features to change chat background, has many different stickers, etc.

It has a unique feature that allows users to send free SMS via Hike Messenger itself to anyone, though the number of free messages are limited but it keeps on recharging as you keep on using Hike.

It also offers reward points which can be used to recharge your phone, isn’t that great. You can earn reward points by sharing and invited members to Hike.

The number of members in a group allowed is 200, which is lot more than in WhatsApp and it also allows you to send a file upto 100 MB. And recently Hike has also added free voice call feature, which is great.

So, Hike Messenger is one of the best Whatsapp alternative and has many unique and better features than WhatsApp and once you start using you will start loving it.

Another good alternative to using the normal what’s app is to use GBWhatsapp latest version. It comes with many pro features that is not present in normal version of whatsapp.

WeChat is another widely used messaging app. According to last year’s report the platform has over 600 million users worldwide, which is even larger than WhatsApp with 500 million users.

WeChat was developed by China’s Tencent Holdings and is available in almost all the platforms (Android, iPhone, BlackBerry, Windows Phone and Symbian). Unlike WhatsApp, WeChat supports a ton of languages, including English, Spanish, Japanese, Korean and Russian.

It supports features such as Hold To Talk, Broadcast Messages, Stickers, Friend Radar, Shake (to find new users), Web WeChat and other tons of features.

Line is another well known competitor for WhatsApp. LINE has over 430 million users worldwide and is used in over 231 countries. The reason behind it being so popular is that Line allows its user to Free Voice Call or Video call anywhere in the world.

The latest update to Line brings even more functionality to it. It improves the Timeline Home feature to allow privacy settings for individual posts, adds a function to delete users from the Blocked Users and Hidden Users lists, and with the new Snap Movie function, it allows you to create and share a short video with your friends.

Unlike WhatsApp, Line is a lot more than just a simple messaging app, it has branched out to offer in-app games and a variety of standalone apps like Line Camera and Line Tools.

And with all this feature which are far more than WhatsApp, it is one of the best alternative to WhatsApp. Line is available for free in almost all platforms i.e IOS, Android, Windows and Blackberry.

Facebook Messenger is also a free messaging app, developed by Facebook. This app is used by over 500 millions people world wide.

The best part of Facebook Messenger is chat heads. This app allows you to minimize conversation with your friends, and this appears as a small circle which shows the profile picture of your friend. These are floating chat heads that you can drag and place any where in your smartphone’s screen. And these look great and also makes using this app very comfortable.

So, Facebook Messenger is also another great alternative to WhatsApp and is available for free in on IOS, Android, Windows and Blackberry.

These are some of the best alternatives for whatsapp application. Say, you want to chat on a secret app with your girlfriend or you want to try something new, then go ahead with these apps and experiment with a new interface all the way!

Another good alternative to using the normal what’s app is to use GBWhatsapp latest version.

Do you know any other best alternative to WhatsApp for PC? If yes just comment below and we would like to hear from you! If we like your idea, we might add it to this article and give your name in credits. Sounds cool? Go ahead then.